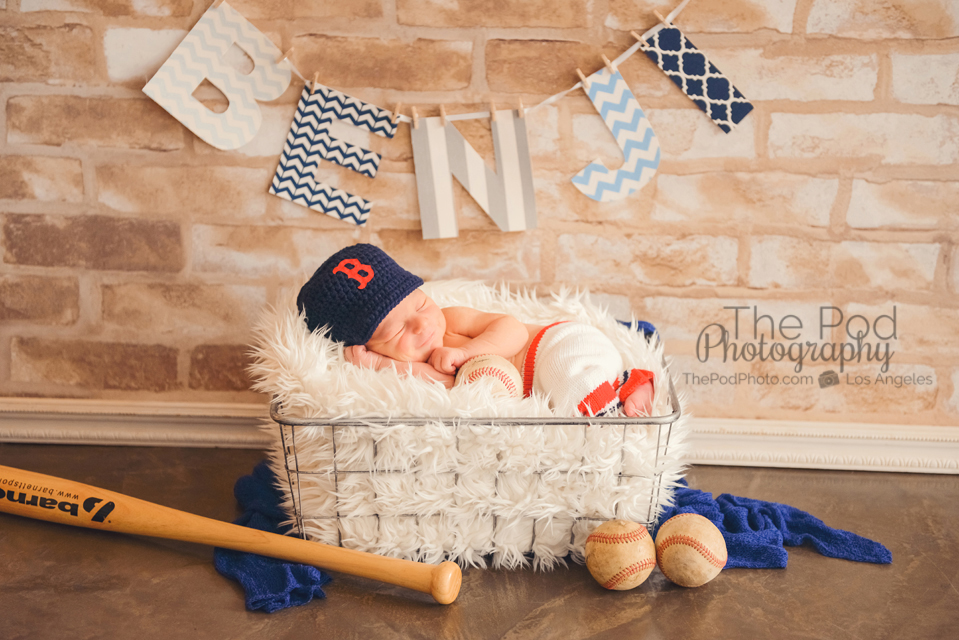 I often feel more like a sociologist than a photographer. It is my job to observe a family, to listen to their desires and learn their dynamic so that I can properly document them and capture the perfect pictures of their newborn that they have hired us to create for them. I have to do so even when a client has no idea what they want – so I have to ask questions, show examples of pictures and coax it out of them: I have to learn them.

The most interesting part of being a Los Angeles photographer, however – is when it comes to gender roles. I meet newborn babies when they are 5-10 days of age and I (based on the questions I have already asked their parents) style the session for a boy of a girl. That generally means a pink and purple photo sets for a baby girl or blue and gray sets for a boy. Those are stereotypical colors, and I am arguably perpetuating the gender-color stereotype.

This awesome family love sports – both mom and dad – and so of course they wanted their baby’s first photos to reflect their shared passion. 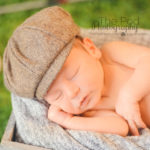 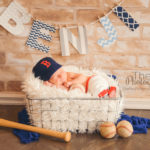 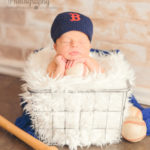 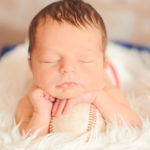 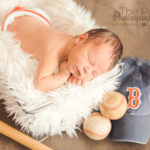 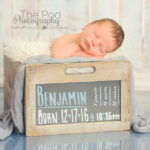 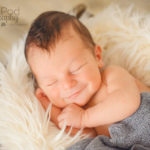 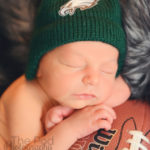 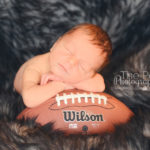 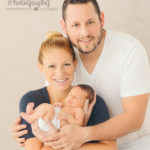 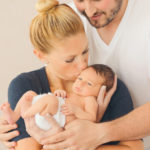 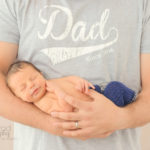 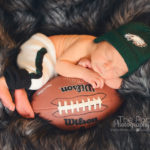 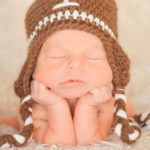 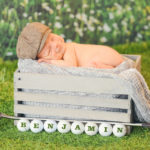 Someone once told me that Hallmark came up with the “pink is for girls and blue is for boys” thing – but I feel like even they can’t be that powerful, so I thought I would look into it and maybe alleviate some of my guilt about putting tutus on newborn babies and forever having their first newborn pictures be overly feminine, per their parents’ request of course. Here’s what I came up with:

“Blue is for boys and pink is for girls, we’re told. But do these gender norms reflect some inherent biological difference between the sexes, or are they culturally constructed? It depends on whom you ask.

Decades of research by University of Maryland historian Jo Paoletti suggests that up until the 1950s, chaos reigned when it came to the colors of baby paraphernalia. “There was no gender-color symbolism that held true everywhere,” Paoletti told Life’s Little Mysteries. Because the pink-for-a-girl, blue-for-a-boy social norms only set in during the 20th century in the United States, they cannot possibly stem from any evolved differences between boys’ and girls’ favorite colors, Paoletti has argued.

Baby books, new baby announcements and cards, gift lists and newspaper articles from the early 1900s indicate that pink was just as likely to be associated with boy babies as with girl babies. For example, the June 1918 issue of the Infant’s Department, a trade magazine for baby clothes manufacturers, said: “There has been a great diversity of opinion on this subject, but the generally accepted rule is pink for the boy and blue for the girl. The reason is that pink being a more decided and stronger color, is more suitable for the boy; while blue, which is more delicate and dainty is prettier for the girl.”

As for why today’s strict color-gender norms set in at all, Philip Cohen, a sociologist also at the University of Maryland, thinks they are, essentially, the outcome of a marketing ploy.

“This happened during a time when mass marketing was appearing,” Cohen told Life’s Little Mysteries. “Being ‘gender normal‘ is very important to us, and as a marketing technique, if retailers can convince you that being gender normal means you need to buy a certain product — cosmetics, plastic surgery, blue or pink clothing, etc. — it just makes sense from a production or mass marketing perspective,” Cohen wrote in an email.

As for why one color-gender pairing came to dominate over the opposite pairing, Paoletti argues that the rule we use today may reflect the influence of French fashion. Traditional French culture paired pink with girls and blue with boys (while Belgian and Catholic German culture used the opposite), and because France set the fashion in the 20th century, their tradition held sway.

However, a new letter published July 21 in the Archives of Sexual Behavior questions this widely accepted pink-for-girls, blue-for-boys origin story.

Marco Del Guidice, a sociologist at the University of Turin in Italy, says a simple search of all the books published in the United States between 1880 and 1980, which have been scanned by Google, suggests that pink was associated with girls and blue with boys during that entire time. Using the program Google Ngram, he searched for the phrases “blue for boys,” “pink for girls,” “blue for girls, “pink for boys,” as well as the singular versions “blue for a boy,” and so on. The rules we abide by (blue for boys and pink for girls) appeared in books from 1880 onward, becoming more common over time, but the opposite rules (pink for boys and blue for girls) didn’t turn up in the book search at all.

“Pink seems to have been a feminine color at least since the late 19th century,” Del Guidice wrote in an email. “In summary, when inspected closely, the reversal in pink-blue gender coding shows many warning signs of a scientific ‘urban legend,’ an urban legend that somehow managed to infiltrate the peer-reviewed literature.” [Our Favorite Urban Legends Debunked]

If pink has always been feminine and blue masculine, this allows for the possibility that these gender-color associations have some basis in human biology. Do girls inherently prefer pink, and do boys inherently prefer blue? No one knows, Del Guidice said. “I bet the answer will turn out to involve an interplay of culture and biology. For example, in 2007 a study found evidence that males and females may be sensitive to different regions of the color spectrum, but the explanations that have been proposed are still very speculative and leave much to be desired. I think this is an absolutely fascinating question.”

However, Del Guidice added, people stopped studying whether there was a biological basis for the gender-color associations because it seemed obvious that there couldn’t be, in light of what he calls the “urban legend” that the associations only formed recently. [Your Color Red Really Could Be My Blue]

Paoletti says Del Guidice’s book search simply missed most of the visual representations of mixed color-gender associations that she has observed. “I would never think of doing a word search in order to study something visual,” she said. The fact remains that baby paraphernalia from the early 20th century followed no single standard when it comes to gender-color associations — a confusion reflected in the magazine articles that Paoletti found.

Cohen adds that despite Del Guidice’s book-search results, all other evidence indicates that, today, we differentiate children by gender much more than we did 150 years ago, when babies of either gender were typically outfitted in white dresses. The recent strengthening of gender-color associations must be cultural, he argues, leaving little room for the notion that each sex has evolved its own color preference. “If you don’t have a strong reason why evolution would have dictated this and that, if you don’t have a biological basis for this preference, then you’re really just making it up,” he said.

The debate about how, exactly, we got to the point where something as impartial as the color pink seems infused with femininity, will probably rage on in the pages of academic journals. In the meantime, we’re left to ponder the bizarre truth that just a century ago, a magazine asserted, “the generally accepted rule is pink for the boy and blue for the girl.”

Well, I guess it wasn’t Hallmark after all!

Interested in having us document your baby’s newborn portraits? We’d love to! Visit our website www.ThePodPhoto.com and give us a call at 310-391-4500. Our studio services the Woodland Hills area and beyond.